Book Cover Redesign
For this assignment, I examined several different book covers for the text Lolita and analyzed its evolution in light of cultural trends. Then, using Photoshop, I designed a new cover and provided an analysis in a blog post for the class. Here is the final product:

Lolita
In my analysis of Lolita covers over the last 60 years, I argued that those following Kubrick’s film were notably more sexually explicit than those released in the 90s and later. I attribute this to a shift in how we have come to think about sexuality, youth, rape. Though this text is considered a respected piece of literature, I think our society now might find it more difficult to celebrate a text that excuses and even glorifies the abduction and rape of a twelve year old girl.

In my new cover of Lolita, I attempt to capture this more acute social awareness of sexual assault and rape. Rather than focus on Lolita’s sexuality, I wanted to emphasize Humbert’s position as a scourge on her life. I first imagined an image cast in shadows, perhaps even the shadow of a man over something suggestive of childhood. I read that an effective cover should be simple and should utilize negative space, and I worried that this initial idea might become too complex or cluttered. 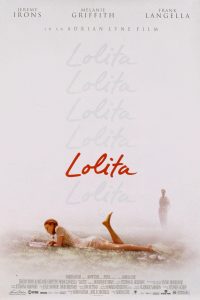 For further inspiration, I next turned to the posters for Adrian Lyne’s 1997 film remake. Lyne’s film, though still marketed as “erotic” and a “love story,” more clearly explores the uncomfortable ambivalence of the story than Kubrick’s version did. For instance, the IMDB description reads, “A man marries his landlady so he can take advantage of her daughter” (imdb.com). Though the film posters still position Lolita as beautiful and sexual, she’s bathed in white–a marker of purity and innocence. In a more recent iteration of Lyne’s film poster (left), Humbert is seen behind Lolita, watching her, veiled in shadow. His presence seems almost haunting and somewhat ominous. This was the feeling that I wanted to capture in my cover.

In my design, I started with a simple image of a doll’s face. The toy represents childhood, and the image of a doll might be read as Lolita herself. Though the doll is lightly dusted with freckles, she also appears to be adorned with heavy makeup on her brows, eyes, and lips. Like Lolita, the doll is a beautiful play thing, meant for somebody else’s pleasure. Her empty plastic eyes convey no desire of her own. This image puts 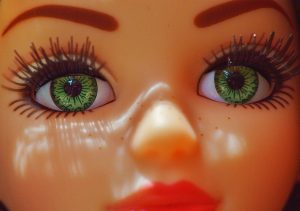 emphasis on the ambiguity of Lolita’s position in the text and also suggests passivity. This is an aspect of the text that isn’t emphasized in the film adaptations and isn’t often the focus of conversations about the text.

I cast the doll image into black and white to more heavily emphasize the shadows across her face. Like Lyne’s film poster, I wanted an creeping sense of Humbert’s presence. The shadow across her face, then, is meant to represent Humbert. Significantly, the shadow largely obscures most of the doll’s features and almost entirely erases the child-like freckles evident in the original image. 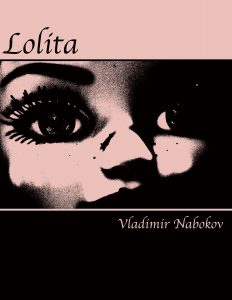 Black and white was too stark for this cover, so I changed the white to a dusty pink. This soft pink draws on Lolita’s femininity and also her youth. The red suckers and lips used in Kubrick’s images suggest womanhood and sex, but soft pink–while still akin to red–is more fitting for a young girl.

The title and author are set in opposite colors on opposite sides of the cover not only for aesthetic balance but also to emphasize tension and opposition between the pink which represents Lolita and black which represents Humbert. This is a visual representation of the stark contrast in their ages and the tension between their characters in the text. Significantly, however, the colors are not in discord. On the contrary, the cover is aesthetically pleasing and balanced. This balance is meant to play on the ambivalence that exists in the text. Though I think it’s important to at least acknowledge Lolita’s position as an innocent who was, more or less, preyed upon by an older man, it’s also important to consider that Lolita did perhaps love Humbert. I think it would be a misrepresentation of the text to design a cover that cast Humbert as a villain and Lolita as a victim–the story is much more complex than that.

It Lurks Within
I took this course as an independent study with one other student. For our final, we proposed a blog rather than a traditional academic paper. We wanted to illustrate how the work that we do as humanists might be shaped into something that’s more accessible to a larger population. In other words, our project was to show how we might bring academic thinking about literature into popular discourse. Our site can be visited here: